Focus: What the World Expects from President Obama

Back to focus index

CIAO Focus, December 2008:
What the World Expects from President Obama 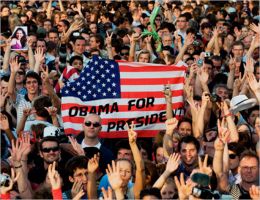 Barack Obama's victory in the U.S. presidential election was greeted around the globe with great jubilation, from Europe to the Middle East to the Far East. With anti-Americanism mounting since the invasion of Iraq in 2003, Obama's message of change has elicited worldwide hope that a new era in U.S. foreign policy is about to begin. According to a BBC poll conducted last summer, more than half of respondents from 22 countries said their view of the United States would change if Barak Obama were elected president.

But while Obama has outlined plans to shut down the detention center in Guantanamo Bay and wants to pull troops out of Iraq, he still plans to vigorously fight the war on terror in Afghanistan and even Pakistan if need be. Obama’s picks for his national security team—Hillary Clinton, a foreign policy hawk; Robert Gates, a Republican hold over; and James Jones, a Marine general—suggest that he is looking to govern from the center rather than the left wing of the party.

Moreover, the economic crisis at home will most likely take precedence over ending the war in Iraq or restarting the peace process between Israel and the Palestinians.

This month CIAO takes a look at what the rest of the world is expecting from Barack Obama.

From the CIAO Database:

The New President and the Middle East: From Campaigning to Governing

Bringing in the Americans?" – Assessing EU And U.S. Post-Kyoto Policies & Options towards a Copenhagen Protocol

What Iraq Needs from the Obama Administration: Recommendations from Iraqis Resident in the U.S

* Outside links are not maintained. For broken outside links, CIAO recommends the Way Back Machine.